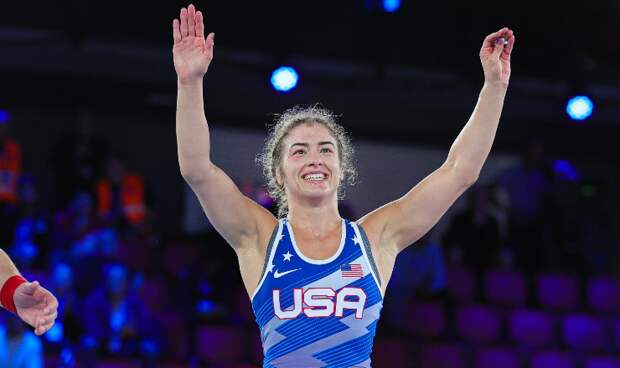 A couple of months after taking a bronze medal at the Olympics, Helen Maroulis is back on top of the world at 57 kgs. Maroulis started off slow and was put on the shot clock first. A violation of the :30 seconds without any scoring resulted in a point for Anshu. That accounted for the only point in the opening period. Maroulis turned up the intensity in the second and grabbed a takedown. Not content with a one-point lead, Maroulis locked up an armbar and relentlessly twisted and turned her Indian foe until her back was exposed. Smelling fall, Maroulis continued to work and buried Anshu for the fall.

The win marks Maroulis’ third world title and her seventh world/Olympic medal. It also completes a remarkable turnaround as Helen suffered severe head injuries that almost made her quit the sport in 2018-19. In 2021, Maroulis became the first American woman to win multiple Olympic medals and added two medals to her collection this year.

The bronze medalists at this weight were Davaachimeg Erkhembayar (Mongolia) and Sae Nanjo (Japan).

Bilyana Dudova put the finishing touches on an incredible 2021 as she defeated Japan’s Akie Hanai (Japan) to claim her first world title. Earlier this year, Dudova won gold at the Kolov-Petrov, the European Championships, and the Yasar Dogu. This was not Dudova’s first brush with a world title, as she was a silver medalist three years ago.

In the world final itself, with Hanai, Dudova blew the match wide-open less than :40 in with a four-point arm throw to take a 4-0 lead. She never looked back and cruised to a 6-4 victory.

American Maya Nelson took a 3-0 lead into the second period of her bronze medal match with Mongolia’s Shoovdor Baatarjav before suffering an apparent shoulder injury. It obviously limited Nelson in the second period and she gave up a pair of takedowns to the Mongolian. Even so, Nelson almost secured a winning takedown at the buzzer, but fell 4-3.

Kyrgyzstan continued its rise on the women’s wrestling scene with their second world champion in 2021 as Meerim Zhumanazarova prevailed over Japan’s Rin Miyaji. Zhumanazarova also was an Olympic bronze medalist earlier this year. In the semifinals, Zhumanazarova barely got by Khanum Velieva (Russia), winning 3-3 on criteria. There was no such drama in the finals as Zhumanazarova pinned Miyaji.

Miyaji had her own shocking pin in the finals when she cradled Olympic champion Tamyra Mensah-Stock. Mensah-Stock claimed a bronze medal after a one-sided win over Adela Hanzlickova (Czech Republic). She now has her fourth World/Olympic medal.

Velieva edged Olivia DiBacco (Canada) 2-1 for the other bronze medal.

It may have slipped under the radar based on the performances of other Japanese athletes, but Masako Furuichi elevated herself into an exclusive stratosphere by winning her eighth world title across four age groups. Now she has won at the Cadet, Junior, U23, and Senior levels. It wasn’t her first Senior medal, as she was ninth in the world in 2019. She also won Junior’s every year from 2014-16.

In the world finals, against Zhamila Bakbergenova (Kazakhstan), Furuichi was victorious in a hard-fought effort, 3-0. She did the same in a close 6-2 match versus Anna Schell (Germany) in the semis.

Schell and Buse Tosun (Turkey) were the other bronze medalists at the weight.