Climbing is a sport rife with literary characters who have said some very funny things. With the help of this website, I was able to come up with a nice list of quotes. Here are some great one liners:

“A climber’s day always starts at the crux: getting out of bed.” — Unknown

“There is no difference between religion and politics. Both involve lies and fanatical beliefs that generaly defy logic… Just like rock climbing.” — David Schuller

“To qualify for mountain rescue work, you have to pass our test. The doctor holds a flashlight to your ear. If he can see light coming out the other one, you qualify.” — Willi Pfisterer

–It’s pretty common for people on the internet to talk about how they’re great climbers. We often refer to this as spray. Dawn Alguard had a great response to such an individual on the rec.climbing google website:

You’d like to talk about yourself and what swell stuff you’ve climbed lately. Well, who wouldn’t ? As it turns out, we have a format in which that sort of spray is acceptable. It’s called a TR. In a TR, every other word can be ‘I’ and the words in between can be numbers representing how rad you are, though it’s a time-honored tradition to throw in a few sentences about how afraid you were that you *weren’t* going to [insert heroic deed here] before getting to the part about how you do.

Your trouble is that you’re trying to disguise your spray as RFIs or attempts at actual human conversation and no one is fooled. It is quite possible to say ‘Now that I climb outside so often I find that I absolutely suck at gym climbing and since I’m having a miserable time there, what with everyone snickering at me and falling off of things I think I should be able to do, I’m asking myself why I spend the money on a gym membership when I can go to rec.climbing and get snickered at for free‘ without mentioning a single number.”

–A student working on a research paper once asked Mike Garrison how glaciers move. The student asked, “can you please tell me what you know about the movement of glaciers?” Mike’s response follows:

Glaciers feel best when they have one movement per day. Some glaciers do just fine with fewer movements, but when they don’t have movements for a long time the result can be quite bad. Glaciers which move much more frequently tend to have loose and soft terminal moraines (also called rock piles).

Glacial movement is almost always associated with the release of water. But sometimes glaciers release water without experiencing a movement. 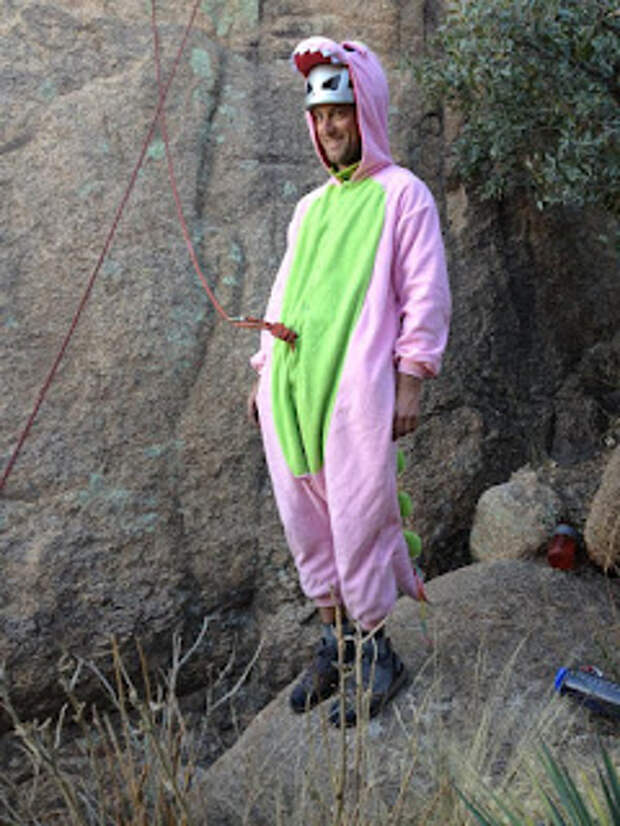 –One time Greg Hamilton was asked what he suggested as a high altitude training regimen. He responded with the following comment:

I suggest going out to the nearest pub and getting completely, and utterly, wasted. Make sure you smoke at least 1 pack of unfiltered Camel’s. Get the full ashtray, pour a drink in it and then pour the mixture into a water bottle.

When you get home (ideally around 3:30am) stick the vile mixture into your freezer. Put on your best goretex and thermal layer. Climb in. At 5:30am, get out, drink (chew?) the mixture and go run the biggest flight of stairs you can find. Run until your heart threatens to explode.

The dehydration caused by the alcohol should adequately simulate what you may experience at higher altitudes. Your lung capacity should be sufficiently impaired by the smokes to simulate a oxygen poor environment. The freezer episode should adequately replicate a bivy. Drinking the booze/butt mixture should simulate your lack of appetite…..

Oh — once your finished your workout, go to work (to replicate the long walk out).

These are all great and the website that I found these on has a great deal more. What climbing quotes have you heard? We would love it if you would post them on our comments page!